Buckner Printing is a printing company based in Brisbane employing 38 workers.

During the medium size business initiative (MSBI), Workplace Health and Safety Queensland (WHSQ) identified the task of manually moving a paper cylinder onto a dispatch pallet as a potentially hazardous manual task during a walk around inspection of the business.

A WHSQ inspector and safety officer watched a worker perform the task in order to determine if workers were at risk of injury.

A large cylinder of printed paper, weighing 360 kg, is required to be manually moved about 10 metres from the printing machine to the storage area for dispatch. The paper cylinder comes off the machine onto the floor in an upright position. 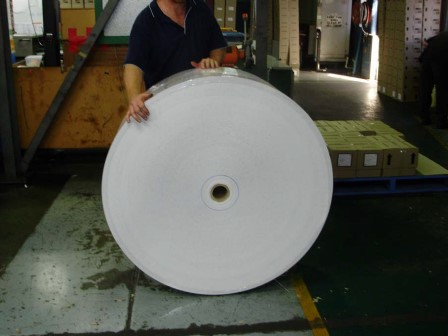 The worker pivots the paper cylinder so it faces the direction of travel, then exerts a large amount of force to obtain enough speed and momentum to roll the paper up a small ramp that leads to the dispatch pallet, positioned next to an access way. 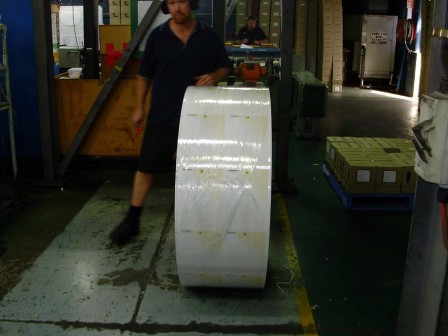 Worker spins cylinder around to face direction of travel. Smooth floor surface assists with this movement. 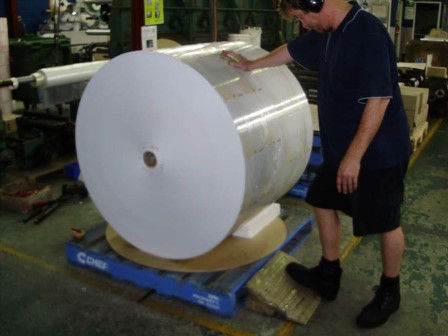 A big effort (forceful exertion) is needed to gather enough speed and momentum over 10 metres to manually roll the cylinder up the ramp onto the dispatch pallet.

There was no standard operating procedure or risk assessment completed for this task.

The following risk factors were observed by the WHSQ inspector:

The WHSQ inspector identified that the task was hazardous and that the risks had not been controlled. The inspector discussed the task and risk factor issues as well as possible controls with the safety officer.

The inspector issued an improvement notice and the workplace was given one month to comply. 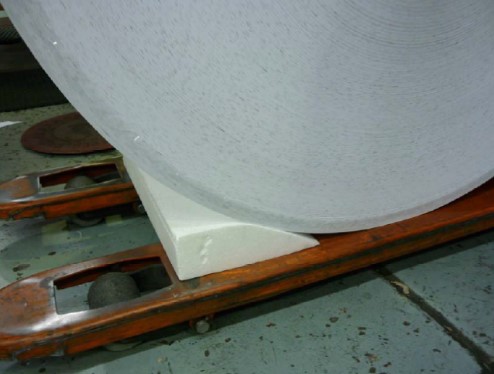 Using a pallet jack to move the heavy paper cylinders.

Following consultation with the workers, the business developed a safe operating procedure by eliminating the need for a worker to manually roll the paper cylinder up the ramp onto the dispatch pallet. The method of handling was redesigned by: The worker chocks the cylinder so it won't come off the pallet jack during travel.

The pallet jack's tines are at the same height of the dispatch pallet, making it a smooth transition. The risk of the paper cylinder overshooting the pallet is minimised by the chock already in place. 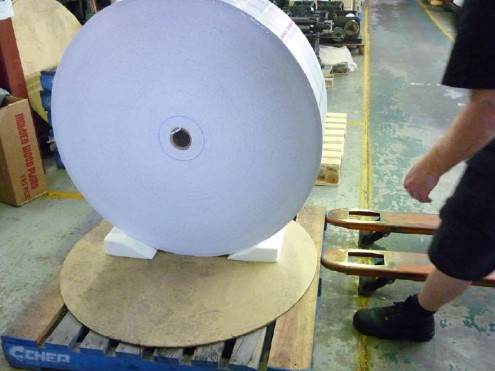 The paper cylinder can be deposited onto the dispatch pallet.