BP is engaged in the exploration for and production of oil, natural gas and liquefied natural gas, and the refining, transportation and marketing of petroleum products. BP is also responsible for a number of coffee making facilities as part of retail activities at its travel centres. Some of these travel centres experience high volumes of coffee production, with approximately 140 coffees produced per hour during peak periods. These high volume sites include Wild Bean Cafes based at travel centres across South-East Queensland.

The main work health and safety issues for Wild Bean Cafes involved the repetition of each task and the duration of time spent on making coffee. Injuries to the upper limbs (wrist, elbows and shoulders) were experienced by some baristas as a result of repetitive movements, which included handling milk jugs to texture milk.

The company addressed these issues by:

The intervention was implemented over three months as part of Workplace Health and Safety Queensland's Participative Ergonomics for Manual Tasks (PErforM) program. The consultation phase involved BP's health, safety, security and environment (HSSE) committee and the retail national safety manager. BP plans to formalise the rotation of tasks by putting in place a policy with written guidelines.

The benefits of the intervention included the following: 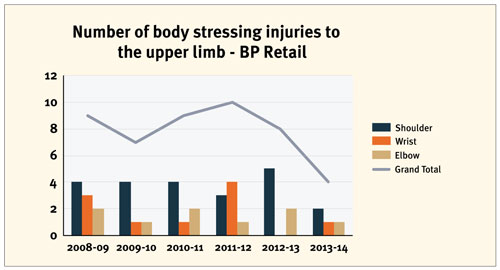 Intangible benefits included the increased motivation of staff from cross-skilling.

The duties are distributed more equally across workers as a result of the 30 minute rotation.

Over a five year period, the changes made by BP Retail are estimated to provide a return on investment of around $2.74 of benefits for every $1 of expenditure.

This is a high-level analysis and should not be relied upon in making any future business decisions. Proponents are strongly urged to make their own estimates and decisions based on their individual business modelling.

View further information on return on investment for work health and safety interventions.