To alert employers, self employed persons, persons in control of workplaces, designers, importers, manufacturers, installers and suppliers of plant, and workers in the diving industry to the hazards caused by inappropriate construction, positioning and inspection of air intake hoses on surface supplied breathing air systems, primarily of the 'hookah' style, powered by combustion motors.

There have been a number of incidents where divers have been poisoned or killed by breathing in toxic doses of carbon monoxide due to the incorrect construction, positioning and inspection, or inadequate safeguards, in relation to setting up a 'hookah type' compressed air delivery system. 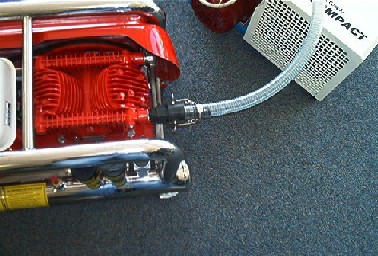 What is carbon monoxide?

Carbon monoxide (CO) gas is an odourless, colourless and tasteless gas and is found in the exhaust of petrol and diesel motors, such as those used with diving compressors for filling diving air tanks or for supplying divers air at depth through surface-supplied air systems.

Carbon monoxide has an affinity for haemoglobin over 200 times greater than oxygen. This means that it displaces oxygen from the blood and leads to the formation of carboxyhaemoglobin. This lack of oxygen going to the brain, heart and other tissues can lead to death.

Diving at depth increases the toxic effect of carbon monoxide.

What are the symptoms of carbon monoxide poisoning?

The symptoms of carbon monoxide are listed in Table 1 below. Note that smokers have a carboxyhaemoglobin level (HbCO) of up to 10%. Levels higher than this, especially at depth, put divers at risk as they become rapidly confused and don't realise they are in trouble.

The next two cases illustrate what can happen to divers who inadvertently breathe in carbon monoxide. Following a dive at 10 metres for one hour, a 42-year-old diver noticed headache, fatigue, uncoordination and confusion immediately after surfacing. He recovered and went diving two days later with friends. After 10 minutes at 10 metres he surfaced and was noticed to be acting strangely. Shortly after returning to the bottom he swam rapidly to the surface and then slowly sank back down.

When his friends hauled him to the surface he was unconscious, not breathing and without a pulse. Cardio pulmonary resuscitation (CPR) was initiated and he regained consciousness and had frothy pink phlegm. He was confused and uncoordinated, requiring treatment in an intensive care unit.

In another case, a 25-year-old diver was working in a dock using an airline from a surface compressor. Having dived 10 meters for 30 minutes he had difficulty returning to the quayside and was seen by his co-workers to be confused and needing help to remove his equipment. He was coughing, disoriented and weak with a rapid pulse. There has been a recent death of a Queensland diver where CO was a significant contributing factor.

Other deaths of divers in other states show that the most common source of CO poisoning is via contamination from the exhaust gases of the motors powering their compressors.