In July 2021, WHSQ was advised of a tower crane incident where a climbing frame guide roller assembly, four bolts and two shim plates fell to the ground.

These findings are not yet confirmed and investigations are continuing into the exact cause.

In this incident, the climbing system incorporated two climbing lugs on the outside of the tower. As the tower was raised, the lugs would move past guide rollers on the inside corner of the climbing frame (see Figure 1). Early investigations indicate the guide roller assembly contacted a climbing lug and the four bolts attaching the assembly to the climbing frame were sheared off. This caused the roller assembly along with the broken bolts and two shim plates to fall 62 storeys to the ground. Thankfully, no one was injured as a result of this incident, however the risk to workers and others was significant. The roller assembly alone weighed more than 20 Kg. 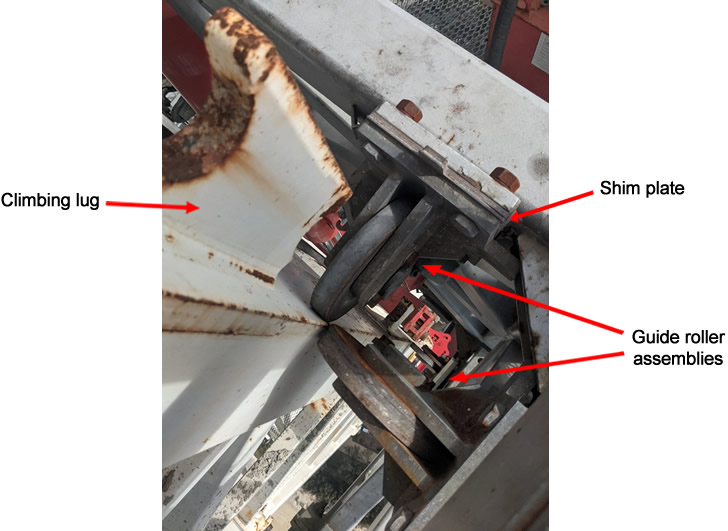 Ways to manage health and safety

Taking steps to manage risks is a condition of doing business in Queensland. Effective risk management starts with a commitment to health and safety from those who manage the business. If an incident occurs, you'll need to show the regulator you’ve used an effective risk management process. This responsibility is covered by your primary duty of care in the Work Health and Safety Act 2011.

The climbing frame is installed around the mast of the tower crane and incorporates one or more double acting hydraulic cylinders to raise the top of the crane so new mast sections can be inserted and pinned or bolted in place. The frame is largely open at the front to permit the passage of the new mast section. For convenience, the description given below is for climbing frames fitted with a single hydraulic cylinder.

The climbing frame is connected to the top of the crane below the slewing module, upon which the crane rotates. The base of the hydraulic cylinder assembly is positioned on the mast of the crane and pushes against special climbing lugs on the mast. The top of the crane, including the slewing module, main jib, machine deck together with counterweights and crane cab, is then disconnected from the mast and the hydraulic cylinder ram is used to raise it a sufficient distance in order to insert a new mast section, increasing the crane height.

The rollers or wheels are intended to keep the top of the crane vertically aligned during the climbing process.

The hydraulic cylinder(s) on climbing frames are extremely powerful as they have to support the dead weight of the tower crane above the frame. If a climbing frame roller assembly snags on an obstruction, such as a jacking lug on the tower, the hydraulic power can easily break the assembly off and create a falling object risk. As a climbing frame can be at a significant height above ground level, the falling object may land many metres from the base of the tower crane and poses a significant risk to workers and members of the public.

Note: Section 5.4.4. of the Code discusses the use of restraining systems on packers or shims to catch the component if it inadvertently dropped (i.e., safety chains). This method is frequently used for packers where the tower is tied back to a building. However, on a climbing frame, the packers may need to be moved between roller assemblies and a safety chain could potentially introduce other hazards. The method could, however, be used as a temporary back up to use on a packer while a rigger is trying to position the packer in place (i.e., while the bolts are being inserted). However, the slack in a safety chain must be minimised and there must be no risk of the chain failing from shock loading if the packer falls.

For advice and support: