The purpose of this safety alert is to highlight the risk of hoist rope failure and loads dropping from mobile and tower cranes, which can occur when the hoist limit is disabled or does not function correctly. Employers, builders, workers and crane operators should apply the principles in this alert to any crane with a hoist rope.

Hoist limits stop the hook block before damage to the crane can occur (i.e. ‘two blocking’ cannot occur). Hoist limits in the mobile crane industry are typically known as anti-two block devices. On most mobile cranes, the hoist limit generally includes a small weight hanging from chain(s) hooked up to a limit switch (refer Photograph 1). As soon as the upward motion of the hook block hits this weight, a switch is activated and some crane functions are disabled (e.g. hoist up, tele out and boom down).

On many tower cranes, the hoist limit is based on a geared device attached to the hoist rope drum that activates a deceleration device (‘decel limit’) and a final limit. The decel limit slows the hoisting speed from high speed to low speed1 and the final limit stops the hoisting function. On tower cranes there will usually be some variation between the points where the decel and final limit activate on the same crane. This is due to characteristics of the cam device connected to the rope drum drive (the drive reduction from the rope drum to the cam spindle is significant).

Irrespective of the type of crane and hoist limit device, correct operation of the hoist limit is important to avoid major safety issues.

In the last three years there have been four incidents where hook blocks have fallen due to the hoist limit not functioning as intended. In three tower crane incidents the hoist rope broke, dropping a heavy hook block from the crane boom. In the 2019 incident involving a hammerhead tower crane rigged with two falls of rope, the hook block and the load of scaffold stair modules fell approximately 40 metres and hit the ground very close to a pedestrian and a worker (refer Photograph 2). In the January and February 2022 incidents, involving electric luffing tower cranes, the hook block, rigged with two falls of rope, fell from the boom tip to a suspended slab more than 50 metres below and an adjoining property 100 metres below respectively. In the January 2022 incident, the hook block punched a hole in the top of the slab2 and then bounced onto an airconditioning duct, causing substantial damage (refer Photograph 3). In the February 2022 incident the hook block struck the perimeter screen on the site and two counterweights bolted to the side of the hook block became detached as the hook block dropped. A rope sheave was also destroyed with parts of the sheave falling to the ground. The hook blocks in these two incidents weighed approximately 400 kilograms. The December 2021 incident involved a 130 tonne maximum rated capacity hydraulic boom slewing mobile crane, rigged in single fall. The hook block was pulled through the rope keeper bar(s) and over the head sheaves while being hoisted up before falling onto the deck of the crane causing significant damage (refer Photograph 4).

In the January 2022 luffing tower crane incident, a check of the winch drum after the incident indicated a decel and final limit were working. However, the distances at which these limits were set could not be accurately verified as the hoist rope was broken. Inspection of the boom following the incident confirmed the rope had failed due to two blocking, so it is possible that, although the limits were operating, they were inadequate. In the February 2022 incident, it is understood the hoist limits had been operating prior to the incident.

In both of the luffing tower crane incidents, the crane was being packed up with the boom luffed up to a relatively high angle. It appears the crane operators initially raised the boom then hoisted up. With a high boom angle, it can be difficult for an operator to see the amount of hoist rope between the boom tip and the hook block. 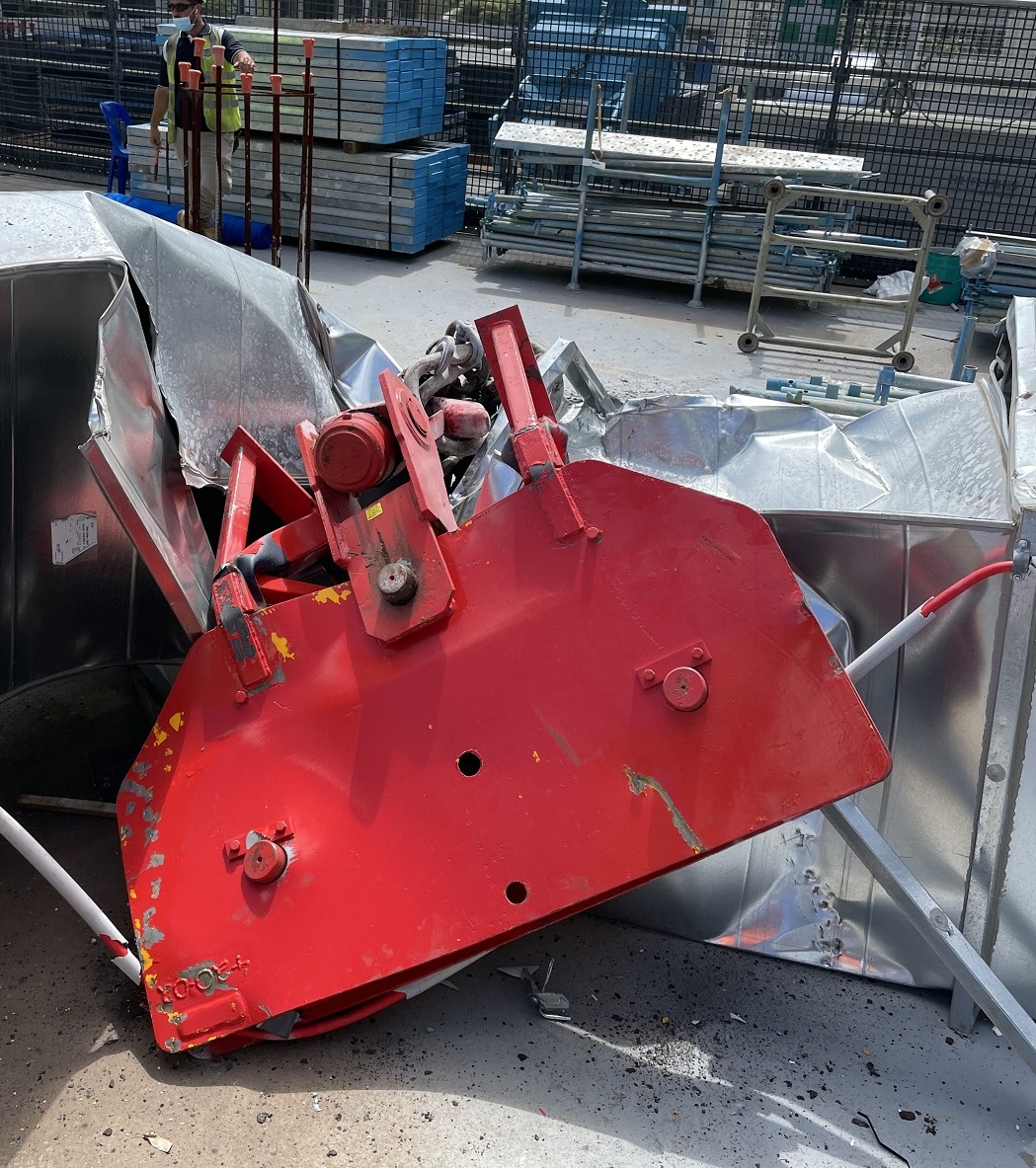 Any hoist limit system set up on a mobile or tower crane should ensure two blocking cannot occur, irrespective of the hoist speed, the number of rope falls or the boom luff angle.

The lower the number of rope falls between the hook block and the boom (e.g. head sheaves, hook trolley), the faster the hook block will approach the boom. For example, in single fall the hook block will approach the boom four times faster than a crane with four falls of rope based on the same winching speed. Therefore, setting limits based on distance below the boom and using this same distance irrespective of the number of rope falls may not be adequate. As an example, setting a final limit based on a vertical distance that will guarantee two blocking does not occur for four falls may not be effective for less than four rope falls.