According to new statistics, annual workplace fatalities in Queensland increased from 39 to 41, while the fatality rate remained at 1.6 per 100,000 workers.

The figures are below the five-year average for both fatality number (44) and rate (1.8). Although most other states have seen bigger increases in both numbers and rates, Queensland continues to record the second highest number of worker deaths in Australia after New South Wales.

Queensland’s annual fatality rate is equal highest with South Australia, although Queensland and Victoria were the only jurisdictions not to record an increase in the fatality rate.

Since 2012, when a national strategy targeting fatalities and injuries commenced, Queensland has seen a 28 per cent reduction in the number of traumatic worker fatalities, down from 57 in 2012 to 41 in 2019. This makes Queensland the second most improved jurisdiction over the period after the Northern Territory.

Similarly, the fatality rate has reduced 36 per cent between 2012 (2.5) and 2019 (1.6), the second largest decrease after NSW. These results for Queensland exceed the 20 per cent national strategy reduction target.

Sixty-two per cent of all fatalities were in three industries—transport, postal and warehousing; agriculture, forestry and fishing; and construction. 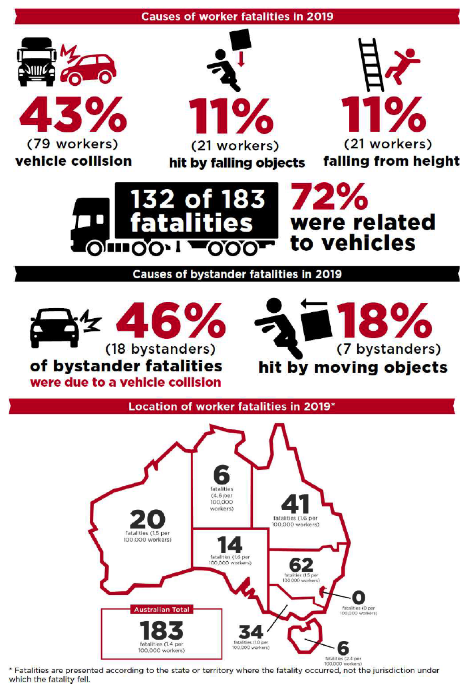