To provide information on the collapse of concrete placing booms and the importance of properly maintaining and inspecting these units in accordance with the Concrete pumping Code of practice 2019.

On 8 March 2022, a 32-metre mobile concrete placing boom collapsed on a building site in North Queensland (refer Photograph 1). The king post (slew turret) catastrophically failed because of a crack through the top of the post (refer Photograph 2). The falling boom caused extensive damage to the cabin of the truck on which it was mounted (refer Photograph 3) and to the formwork deck being poured. Fortunately, the boom did not strike the boom line hand or other workers on the slab being poured. The unit was manufactured in 1989. The circumstances of this incident are similar to a fatal incident that occurred on a 32-metre concrete placing boom in Victoria in 2021. 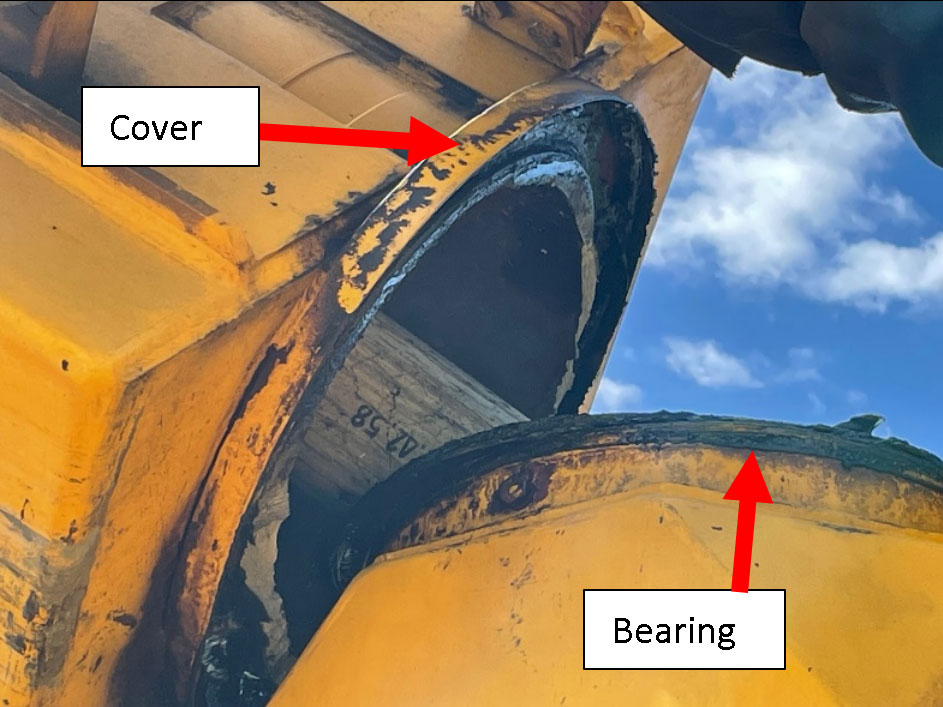 The unit in this incident was more than 30 years old. Concrete placing booms can be prone to metal fatigue and cracking due to a high degree of cyclic loading from the pulsating action of the concrete pump. As the units age, cracking and wear will become more common as they approach or exceed their design life. The need for comprehensive inspection becomes extremely important as the units age. An external inspection of the unit alone, without dismantling, will not be adequate to see all high stress areas. All concrete placing booms need to be maintained and inspected in accordance with the manufacturer’s instructions and the criteria specified in the Concrete pumping Code of practice 2019 (the Code).

The Code specifies several inspection types including pre-operational, routine, annual and major inspections. The major inspection is specified at intervals not exceeding six years. At the major inspection, concrete placing booms, including outriggers and slewing mechanisms, should be dismantled so that high stress areas can be inspected and repaired or replaced. The professional engineer overseeing the process needs to provide a comprehensive report that demonstrates the extent of the inspection and remedial work carried out on the unit.

Dismantling of the unit for the major inspection should be the industry standard for all concrete placing booms operating in Queensland. Also, the six-year major inspection does not guarantee that the unit will be safe for another six years. On-going monitoring of the unit, including a comprehensive annual inspection, needs to be carried out. If the unit is showing signs of accelerated degradation (e.g. wear, cracks), parts of the unit may need to be dismantled and inspected prior to the next major inspection. It is advisable to discard and scrap a concrete placing boom where the degree of degradation exceeds the ability to adequately inspect and repair the unit.

Section 5.6 of the Code states:

The major inspection is to be a comprehensive inspection that includes dismantling all high stress areas and components subject to wear, unless considered unnecessary by the certifying engineer, including those areas that normally cannot be readily accessed during periodical inspections.

If the certifying engineer decides not to dismantle part of a placing boom, the engineer needs to provide a comprehensive documented rationale based on the 10 points included in the Code. The decision not to dismantle should not be based solely on the placing boom owner stating that the unit has had minimal use. The owner should be aware that obtaining a report from the certifying engineer, that does not comply with the criteria in the Code, does not demonstrate compliance with all the duties for owners of plant under the Work Health and Safety Act 2011.