The purpose of this safety alert is to highlight the risks associated with any awning that may collapse, and to raise awareness of the requirements for installing and maintaining awnings.

There have been at least three incidents in south east Queensland since 2006 where awnings have collapsed due to anchorage points or structural support systems failing.

In 2012, a member of the public was killed when an awning collapsed and swung down towards a shop front. The awning, constructed in the 1970s, was supported between two cantilevered reinforced concrete beams extending from the building face. The steel framework of the awning was connected to the cantilevered concrete beams by several expansion (torque-setting) anchors. Over time, the expansion anchors had been prised out of the cantilever beams, until the awning collapsed without warning.

The awning had an unusual design that did not allow the structural connections between the awning and cantilevered beams to be easily inspected, as they were obscured from view. 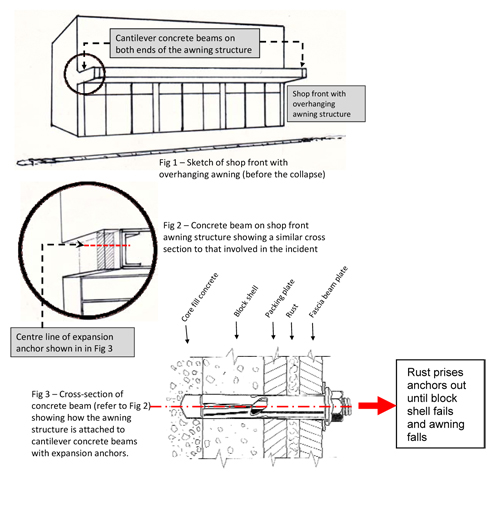 In 2006, two other incidents occurred when the anchors holding the support stays pulled out of the concrete wall and the awning collapsed.

Factors contributing to this and other incidents, include one or more of the following:

Some of the issues identified in relation to insert type anchors include:

Workers installing anchors should be trained in the correct installation method as specified by the anchor manufacturer. If the installer is unable to install the anchor effectively a suitably qualified engineer should provide guidance on alternative anchorage systems to be used.

The principal contractor should implement an effective quality assurance (QA) system to ensure the procedures for installing anchorages comply with the design specification. This includes inspection of the anchorages prior to loads being applied. The QA system may also include the need to do proof loading on anchors (this is particularly important for insert type anchors designed for 'pull out' loads).

Designers should consider the following factors when designing the awning:

Building owners or people with management or control of these structures

Never make structural alterations to buildings, or attach additional architectural features, unless the building designer or another suitably qualified engineer provides written certification. This includes the addition of shade sails to a structure. Local government authorities should also be consulted about requirements for building additions.

All awnings should be regularly inspected and maintained. Where the awning has a support system that cannot be readily inspected, parts of the awning may need to be removed so that an adequate inspection can be completed, and without risk to the inspector or members of the public.

Where there is a likelihood that the awning will collapse, the awning should be removed and replaced with a new awning, giving consideration to the design elements mentioned above. The building certifier should engage a competent person (i.e. an engineer) to verify the design of the structure and to inspect the structure at critical times during construction.

Further information may be obtained from the following codes of practice: