The purpose of this alert is to highlight the risks associated with industrial rope access, particularly the methods used to clean the exterior windows of multi-story buildings.

Two serious incidents occurred on the Gold Coast due to the incorrect selection and use of rope access systems.

In one incident the working line was severed and the worker fell several floors before the rope grab on the second (safety) line locked onto the rope. As the worker fell he repeatedly struck the building and was injured.

In the other incident the worker was injured when he swung down and along the return face of a building due to the pendulum effect.

Diagram 1: Some of the components of an industrial rope access system.

In this incident the working line and safety line were set up to pass over the top of a glass balustrade. The glass panel broke, cutting the working line and partially cutting the safety line. It appears the load from the ropes initially caused the glass panel to break and the fractured glass pieces then cut the ropes. As the rope was under tension from the weight of the suspended worker, it was easily cut by the glass.

Photographs 1 and 2 show the working line and safety line passing over the top of a glass balustrade following the incident. It is not known why the rope grab device on the safety line did not immediately lock on the rope but allowed the worker to fall a considerable distance before his fall was arrested. 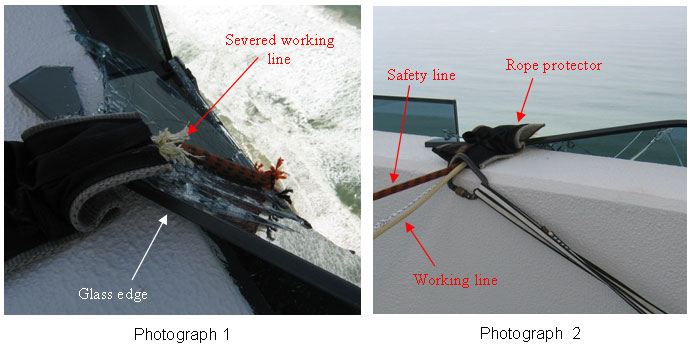 In this incident the worker was using an incorrect set up and was not working directly below the anchor point. Instead he was standing on a ledge of the building while still connected to his suspension system and then moved a horizontal distance away from the original vertical path of the suspension lines. It appears the worker then fell, a pendulum effect occurred, and he swung back across and down the return face of the building approximately 15 metres before hitting a window on a balcony.

Further information may be obtained from the following:

Further information may be obtained from the following standards: