The purpose of this safety alert is to highlight the importance of correctly locking out the free fall controls on mobile cranes fitted with this feature.

A worker was fatally injured by a falling load while erecting a transmission tower west of Dalby in Queensland in March 2012. A 20 tonne rough terrain mobile crane was being used to lift part of the tower when it appears the auxiliary winch inadvertently went into free fall and the load fell, striking the worker.

Hoist winches on some mobile cranes are fitted with a free fall feature that allows the hook and load to fall under gravity in an uncontrolled manner. This feature has been traditionally provided on cranes for activities such as clam-shell dredging and dynamic compaction. However, the risk associated with an inadvertent activation of the free fall feature can be high and the provision is rarely needed. Most mobile crane manufacturers do not provide this feature on new cranes. The risk to workers from falling loads and potential damage to the crane and crane operator is too great to continue to allow free fall on cranes as standard industry practice.

To prevent inadvertent activation of the free fall feature, it is a common practice for crane owners to install a physical lock. Unfortunately, some of the physical lock arrangements have not been effectively installed. Errors have been made when interpreting the operation of the free fall switching mechanism. Photograph 1 shows one example of the physical lock being fitted to the wrong side of the switch. In this example the crane may inadvertently go into free fall if the hoist brake pedal on the crane is depressed. 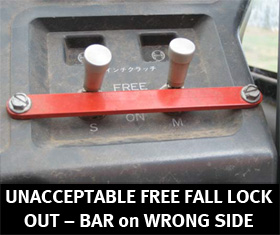 Photograph 1 - Photograph shows an incorrect arrangement of the physical lock on a Tadano TR 200M-5 mobile crane to prevent inadvertent activation of the free fall mechanism where the metal bar has been placed on the wrong side of the switches.

This incident has highlighted the need for the cranes to be operated so that inadvertent free fall of the load cannot occur. Workplace Health and Safety Queensland (WHSQ) considers that the following action should be taken by all owners of mobile cranes in Queensland:

The following additional information should also be noted: