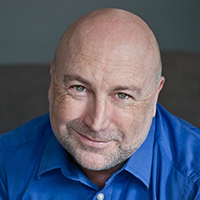 Doctor Mark Cross is a psychiatrist with clinical experience spanning three decades. He was the lead psychiatrist on two series of the ground-breaking ABC series Changing Minds. He was also the medical consultant on the eight-part ABC drama series Wakefield.

He’s the best-selling author of two books, appears regularly in the media and on podcasts and is the founder of The Anxious Shrink on Facebook, which has reached around a million people - it’s anxiety advice that won’t make you more anxious.

Mark graduated as a doctor in Cape Town, specialised in the UK, and has worked as a specialist in Sydney since 2005, and is a current board member of SANE.He holds senior conjoint lecturer positions at the Universities of NSW and Western Sydney. Mark has special interests in sexuality issues, mental health in the workplace and improving the care and quality of life of people with lived experience.

In 2015, Mark received the Royal Australian and New Zealand College of Psychiatrists NSW Branch Meritorious Award for his “significant contribution” to psychiatry. Mark also has lived experience of one of the conditions he treats - he’s been anxious since he was four. His empathy and humour make him one of Australia’s most loved psychiatrists.