Driving home from an extra shift at work as an environmental service officer, Rebecca's vehicle collided with a tree at 100kmh, changing her life forever.

She sustained extensive injuries as a result of the accident, including a severe compound fracture to her right tibia and fibula, broken ribs, and a punctured lung. Over the next seven months, she underwent multiple surgeries on her leg, each surgery requiring a long time in the hospital. Amputation of the leg was even discussed.

Rebecca suffered through the constant pain in her leg, where she had to rely on painkillers which left her feeling incoherent and dazed. She had to use a walking frame or crutches at all times. Previously she had been an active person so not being able to complete everyday tasks on her own and relying on other people to drive her around led Rebecca to feel isolated and depressed.

Rebecca persevered and committed herself to her physiotherapy and mental health recovery and was eventually able to return to work. She worked with her workplace rehabilitation officer to find tasks that she was able to do. With Rebecca's positive attitude towards her recovery, she worked hard and was able to drive again. This meant she could work longer hours and learn more tasks that she could take on. Due to her willingness to learn and hard work ethic, she was given a promotion.

In Rebecca's words “There's always a light at the end of the tunnel, life will get better but only if you put in the effort to accept and change the things you can.” 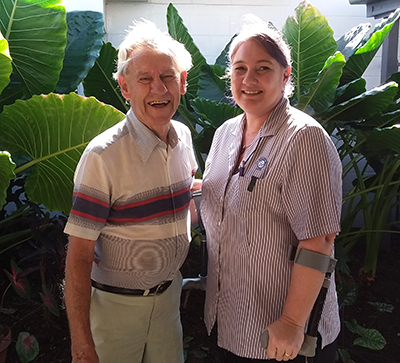